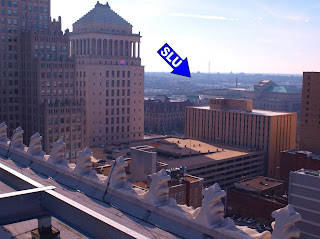 Back in the day when I was considering law school, I remember seeing the school on Lindell and wondering how they fit a law school into such a small building.  Of course, being on the main campus, it could have been spread out in several buildings.  This way, it seems like they'll be able to house the school and library all in one place.

Also a benefit, is that its across the street from the old Federal Court Building, now the City Courts, and also a few blocks from the Thomas Eagleton Courthouse.  The school is scheduled to be in operations for the Fall semester which will bring an increased interest in Downtown Living.  This shot was taken today from the Syndicate Condominiums, just a few blocks away.

Also today, I went by the first public electric car charging station that opened  at 7th and Lucas.  I'll have to say, not really knowing much about electric cars, I was expecting a little more of a 'station' than this.  Its a good start, and having a fleet of electric cars downtown would be nice.  This Enterprise 'We Car' is a start.

Lastly, a marketing company I've been looking at lately, Response Targeted Marketing announced this week its move Downtown from Richmond Heights.  They are excited about the move and the larger quarters.  Downtown is excited to have them.
Posted by Chris Grus at 3:40 PM

STRIKE DOWNTOWN WHILE IT'S HOT! Law school, marketing firm, law, accounting, IT, architect, you name it. Downtown St. Louis is the highest density of ambitious, smart young professionals in the midwest, and that includes Chicago!