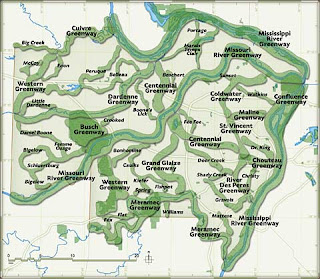 More green space is coming to downtown St. Louis. According to an article by the post dispatch the city’s Preservation Board gave unanimous approval for the 20 Million Dollar sculpture park that will be created on the gateway mall. A group called the Gateway Foundation, a private agency that has placed art installations around the region, is paying for the project. This project will help create another aesthetically pleasing outdoor space in downtown St. Louis. It will be near the new Old Post Office Plaza.
Investment in green projects, such as this sculpture park are useful ways to attract business and residents to the region. St. Louis has a special taxing district called the Great Rivers Greenway District which, according to its website, uses a 1/10th of 1% sales tax to work“for a clean, green, connected St. Louis region. To deliver its mission, Great Rivers Greenway is spearheading the development of The River Ring, an interconnected system of greenways, parks and trails that will encircle the St. Louis region, enhancing the quality of life for residents and visitors." The Chouteau Greenway
Posted by Howard McAuliffe at 1:50 PM No comments:

My take on the tour

The Downtown Living tour seems to be like taking a drink off a fire hose; both for the participants as well as the workers. According to the Downtown St. Louis Partnership's Matt Schindler, there were over 1200 people registered. There was many more not registered, just walking the route looking at open houses.

One thing that those in my profession look for is the number of people who want to buy (or rent) downtown. They gauge the success or failure of the tour based on the number of true "prospects."

The best thing about the downtownt living tour is that it gives so many of the people who don't want to live downtown a perspective on living that they may not experience otherwise.

Getting the general public to see what downtown living is all about is important! Occasionally I hear about people wanting to live downtown and getting flak from parents, co-workers etc. The tour is for these people. We need to continue to encourage people to check out the urban lifestyle whether they are ready to climb aboard or not. So many people in St. Louis still

look at downtown living as such a novelty. It's scary how slow some people are at accepting changes.

As for the prospective buyer's, I'm more afraid than happy for them. The loft tour really is like getting a drink from a firehose. Many of the people we met were overwhelmed this weekend. Overwhelmed and caught in the hype is not a good position to be in when making such an important decision.

One positive note though, the loft district is finally looking like it's growing up. Most loft districts start out with the young and creative class building up and preserving the city, followed by the more mature owners coming in behind to add stability and clout. If this tour was any indication, the more mature buyer has found out about downtown. My guess is that they'll be coming soon.
Posted by Chris Grus at 9:25 PM No comments:

So I am really excited with the changes I see along Washington Ave. I was told that I must stop by The London Tea Room located on the 1st floor of the Ely Walker Loft @ 1520 Washington. I was impressed with the friendly staff & selection of drinks & foods. The teas are unique and have a true European flair & there is something for everyone, even the non tea drinkers. I also enjoyed a very tasty sandwich & a chocolate molten dessert that melted in your mouth!

This is a fresh concept down in the loft district. It feels like home and a place that downtown residents will love.

Attached to the tea room they have a huge furniture showroom. This store was ironically located out in West County and they moved to the city. In speaking with one of the designers they stated they have a large list of clients from all over including Central West End, the Loop, and Even Illinois! The furniture concept is unique and has a strong European edge. You really don’t expect this fresh surprise to be located in the heart of St. Louis’s Loft district. It is great to see that the stores are catching on & they feel that their growth lies on Washington Avenue.

If you are down around town stop in to this unique addition to the loft world! It’s certainly an enjoyable experience!
Posted by Lisa Grus at 9:08 AM No comments:

We will be participating again this year in the Downtown Living Tour on October 13th and 14th and we need help!

In the past, downtown residents have helped out by working with the Downtown Partnership to staff developer's showrooms. Help Your Neighbors! We're looking for people willing to spend a few hours talking with tour attendees about downtown living and the awesome community that we have in the urban core. There can be stories written about how supporting the existing loft market will do more for downtown area now.

Commerce Bank and Metro are bringing free public transportation to St. Louis, at least for a day. Throughout the month of October you can pick up a free metro pass at any Commerce Bank location in St. Louis City, County, or the Metro East. The pass will allow the use of Metrolink and Metro Bus for a whole day, anytime throughout 2007. Don't know where to begin using Metrolink or MetroBus? Go to Metro's home page, they have a feature called "Trip Finder," which allows an easy search of the best way to get anywhere in the St. Louis Region, when you need to get there. Just plug in the origin point, the destination, and the time of departure. "Trip Finder" will figure out how to get there and how long it will take. Highway 40 will be shutting down soon. This is a good opportunity to see how public transportation in St. Louis works. While your using Metro, think about ways the system could be improved. How could it be more efficient? Where else, would you like downtown to be linked to via public transportation?
Posted by Howard McAuliffe at 7:43 AM No comments: