Years ago, a long time downtown worker was at a party we were attending. I was pumped up about downtown. They seemed drab. "Oh yeah...I remember the last time they tried to change things (talking about when St Louis Centre was built)." While there was a very cool influx of new residences and lots of other new plans, the overall landscape still hadn't changed much. This was in 2005.

At the time, we didn't see many veteran downtown workers climbing onto the downtown bandwagon. The typical buyers were looking
for an edgy neighborhood. Of the folks that worked downtown, most were recent grads that had just began their careers.

As time marched on, so did downtown
progress 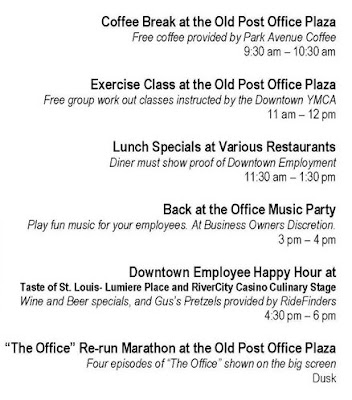 and the addition of the many things that make it the fastest growing St Louis neighborhood: new restaurants and businesses, more updated homes (both owned and rented), new public spaces and commerce.

At the same party each year, I run into the same veteran downtown worker. While she still doesn't live in a St Louis loft, her attitude about the progress downtown has changed from complete skepticism to appreciation for her improved surroundings.

The Partnership for Downtown St Louis have a great message to all the downtown workers with this years Downtown Employee Appreciation Day and many of their other efforts: ENJOY DOWNTOWN!