Tell Me What To Say! 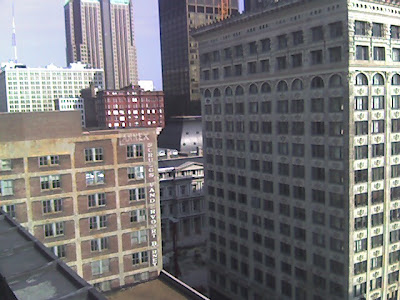 I'm a huge fan of leadership through inclusion.  Having a vision is one thing, but getting people to walk with you in support is the fundamental characteristic that demonstrates the abilities of a leader.  What's especially sad is seeing some insane cause where there's tremendous community support like was the case in Nazi Germany, then seeing an opposing good cause where people just aren't willing to stand up and participate.

The Partnership for Downtown St Louis came up with the latest vision for the future of downtown.  That's really good, because by the time the goals for the last major plan for Downtown (Downtown Now!) was being completed, there seemed to be an absence of vision and planning that accounted for over planned growth in condo surplus exceeding 7 times the highest annual number of units sold.  Thankfully that planned growth didn't occur at the time and most of those projects remain viable for the future.

Right now the residential plan for Downtown St Louis is to have 20,000 residents by the year 2020.  It sounds like a lot to me.  Breaking it down, that's an additional 800 persons per year.

I was invited to a meeting coming up in a few weeks to get together with others in my profession to discuss this plan.  I've read the whole Downtown Next Plan, and find that there are many good thoughts.  I'm happy to participate in the meeting and hear what others have to say.  For some reason, I'm at a loss for what to say about my role in such a meeting.  The plan also includes increasing the number of downtown jobs by 20% and a whole host of other ideas.  It seems to me that the "build it and they will come" philosophy is what will work.  If we do establish better public transportation, if we do remove a bulk of the hideous train tracks from southern downtown and replace it with the Choteau Pond greenway, if we do get another 20,000 workers downtown, people will want to be a part of downtown.

So that's where I sit.  I'm asking for help.  Email me at chris@4SaleStLouis.com if you'd like to remain anonymous or private, but help me to be a useful member of this committee by sharing your ideas on how Downtown Next can be implemented.

Thanks everyone for the emails. The main comments brought forth were to focus on adding more affordable housing, different styles of housing and more green space surrounding buildings.

The meeting was productive mainly in the sense that the Partnership For Downtown St Louis is choosing to include Realtors that work downtown in the process of determining the future of downtown and how it is formed.

The meeting was run in the format: "Its 2020 and all our goals for increased residency downtown have been achieved.....How did we do it?"

That helped to focus discussion away from the current problems we face as a neighborhood.