Very few people are as excited about the impact on St. Louis that the current plans for the MLS Stadium presented last week.   For anyone plugged into Downtown St. Louis, its self evident.   While downtown overall has seen an amazing re-birth over the past 15 years, there are still a few spots overlooked.

From Olive Street on the North, there are mostly smaller, under developed buildings and street level parking lots.  The biggest exception is the Police Headquarters to the north east of the stadium site.   The surface lot from the above pic 🙄shows the metropolitan police parking lot, which is going away.   My first question was, where are the police going to park.   My second question is, where's everyone else going to park? 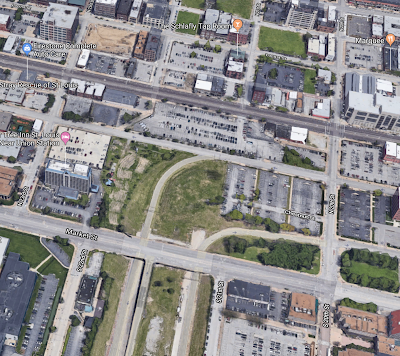 The satellite view shows the current footprint.   HOK developer website doesn't mention parking.  Downtown has an abundance of parking spaces, but as a rule, they are several blocks east,  mostly near Busch Stadium and the Enterprixe Center. o.   This section of town has never really had people density requiring much parking.  The largest draw, historically, was Union Station, which has a fairly small enclosed lot for patrons.  With all the great improvements there, my guess is it will be filled.

Despite any questions, this is still an awesome move for downtown, and for major league soccer.   St. Louis has always been a soccer hotbed at the youth level, but sort of fizzles after that.   Having it as a recognized sport once again at the major league level is huge.

The impact on Downtown West has me hopeful.    My clients that closed on their great new space at the Lofts at 2020 we’re thrilled.  When we sold our first unit in that building in 2005, Downtown west was a wasteland in that area.   After all, they filmed the post apocalyptic drama “Escape from New York” around there.   Other than Schlafly’s and some office renovations, it was scary.   The buildings across the street looked like they had been bombed, and most of the prospective buyer’s we toured through the area were creeped out by the condition and tenants of the Tudor Building:   all of which have undergone total renovations.