The Deals Keep Getting Better

Round 2:   Bringing Soccer to Downtown

So what I learned in 2017 is that St. Louisan's don't like the idea of giving public assistance to multimillionaires.   After all, we're still paying on the last deal and already lost the team.   The investment didn't seem wise.

Of course dreamers like me saw it as a piece in the downtown St. Louis puzzle.   A building block.   I was in favor, but still was wanting our leadership to put more pressure on those that stood to gain the most.

The last plan, estimated at costing $305 million, was asking for 60 million in public assistance;  nearly 20%.  I was reminded of a line from Roger Dawson's, Secrets of Power Negotiating, when he asserts, "You'll have to do better than that."  I've often felt that conflict of emotions with investment in downtown.   Hopes that any public assistance would be a net positive for the city seems like a fair perspective.

Apparently that's just what is happening.

Fast forward to 2018.   I'm thrilled to read that the people I was thinking about all along arrive at Matthew Dickey Boys Club and announce that they have joined the party.   While public financing will still be a part of the deal, according to 6th Ward Alderman Christine Ingrassia, its “the model of what a public-private partnership should look like.”

For anyone spending close to $400 million, I'd say they have a right to ask for concessions on entertainment taxes.   In this case, the City would become the stadium owner (a plus) and so the team and its owners would pay a lease, and not be required to pay property taxes.   If everything comes to fruition, the deal seems to make economic sense for everyone.   The Taylor family of Enterprise and Kavanaugh family of World Wide Technology appear to be viewing the deal more as philanthropic than as an investment that needs to make them money.

So if everything looks favorable, the only catch is 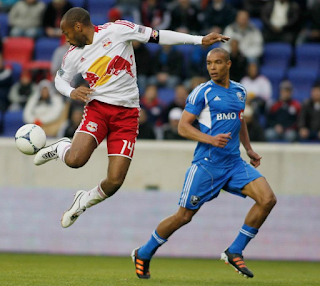 that we'd have to win the bid with the MLS for one of the remaining two teams;  competing against Las Vegas, Detroit, San Diego and Phoenix.   In looking at U.S. media market rankings, St. Louis ranks behind Phoenix and Detroit in terms of media markets, but Detroits media market size is based upon proximity to Toronto, which already has a team.   So feasibly, we should fit in as a top contender.   We currently rank as the 21st largest media market, ahead of Portland, Salt Lake City, Columbus, and Kansas City that currently have teams, and Nashville and Cincinati which have been awarded franchises.

So if we're not too late and things fall into place, folks in Downtown West would have a short walk to catch MLS soccer in St. Louis by 2022!